Fertility in men with cystic fibrosis

Although men who have CF can enjoy a normal sex life, they are almost always (in about 98% of cases) infertile due to failure of the vas deferens, the tube which carries sperm from the testis to the penis, to develop properly (Kaplan et al, 1968). The epididymis sits on top of the testis like a cap. Normally the vas deferens carries the newly made sperm to the back of the prostate gland where it joins the outlets of the seminal vesicles. The sperm can then be released into the semen during intercourse. In CF the vas deferens almost always fails to develop properly.

Can a man with CF be fertile?

A minority of men with CF (2-3%) are fertile especially those with the 3849-10kb C-T mutation (Feigelson et al, 1969; Blanck & Mendoza, 1976; Barreto et al, 1991; Dreyfus et al, 1996). Therefore it is essential that sperm analysis is routinely offered in conjunction with reproductive health education.

Historically, many young men with CF moved into adolescence without anyone counselling them about their almost certain infertility (Fair et al, 2000; Hull & Kass, 2000; Sawyer et al, 2005). We hope that this no longer happens and in our own Unit the question of infertility in men with CF is discussed with all our young teenagers by the Cystic Fibrosis Nurse Specialist before they move from the paediatric to the transitional clinic. It is important that the issue is discussed frankly and sympathetically and that all the boys are quite clear that all other aspects of sexual function are normal. The issue of fertility should be raised again when the young men transfer to the adult clinic. Many have not assimilated the information when younger and remain ignorant about their almost certain infertility.

Fertility in women with CF

Despite most children with CF achieving normal or near normal growth, puberty and therefore the onset of periods is often delayed in girls with CF by one to two years as a reflection of disease severity and especially of poor weight (Arrigo et al, 2003; Ujhelyi et al, 2004). Although most girls have normal menstrual cycles there is a higher incidence of missed or irregular periods and amenorrhoea. This is more likely in those with a reduced percentage of body fat (Edenborough, 2001). These issues should be addressed at regular intervals as part of the routine CF review.

Fertility problems may be related to general ill health, poor weight, or poor control of CF related diabetes mellitus (Johannesson et al, 1997; Edenborough, 2001; Stallings et al, 2005). Midway through the menstrual cycle when the egg is released from the ovary the mucus that is found at the lower end (the cervix) of the womb (the uterus) thins and allows easier passage of sperm into the uterus and fertilisation. Increased thickness of this mucus in women with CF may theoretically act as a barrier to sperm penetration and reduce fertility. In reality this does not seem to be an important obstacle to conception and the majority of women with CF become pregnant without any difficulty. Female fertility problems in CF should be dealt with in the same way as for other women.

Assisted reproduction techniques are designed to retrieve sperm from the man and eggs from his partner and bring the two together to achieve fertilisation (Braude & Rowell, 2003; Rowell & Braude, 2003). Men with CF do produce sperm but in the absence of the vas deferens they collect in the epididymis and do not form part of the ejaculate. The sperm can, however, be aspirated from the epididymis and used for in-vitro fertilisation (IVF; in-vitro means “in glass”). Sperm produced by men with CF are often less motile than those produced by men without CF, and there are also alterations in the normal fructose (sugar) content and acidity of the semen which reduce the chances of successful IVF by routine methods (Von Eckardstein et al, 2000). The low volume ejaculate characteristic of CF results from malfunctioning or absent seminal vesicles. Because of the above problems with semen and sperm from men with CF, a specialised form of IVF is used which involves the injection of a single sperm into the body of the egg. This technique is called intracytoplasmic sperm injection (ICSI).

There are seven main parts to the procedure –

i) Stimulation of the woman’s ovary

Normally a woman produces one egg per menstrual cycle. IVF and ICSI are more successful if several eggs can be obtained. This is achieved by using a natural hormone, Follicle Stimulating Hormone (FSH) to stimulate the ovary to produce between 10 to 12 mature eggs (superovulation). To prevent premature release of the eggs, the normal mechanisms that control ovulation are suppressed during this process. The development of the eggs is monitored by vaginal ultrasound scans.

ii) Collection of the eggs

This used to be done under general anaesthesia with keyhole surgery. Now only sedation is required. The eggs are gathered by passing a needle through the top of the vagina with ultrasound guidance. The average time taken for the procedure is about thirty-five minutes. The woman is able to go home a few hours later. After collection the eggs are preserved in a fluid which has the correct nutrients and chemical balance for fertilisation and early embryonic development.

Figure 2: The eggs are gathered by passing a needle through the top of the vagina with ultrasound guidance under a sedation anaesthetic.

iii) Collection of the sperm

Sperm can be retrieved by direct aspiration of the epididymis or testicle using a fine needle under local anaesthetic. These techniques are called percutaneous epidydimal sperm aspiration (PESA) or testicular sperm aspiration (TESA). Another way to retrieve sperm is through an incision in the scrotum so that the epididymis and testis can be directly visualised (MESA). This is performed under a general anaesthetic. Both techniques result in retrieval of a relatively small number of sperm, which can only be used in conjunction with ICSI treatment. Sperm can be obtained beforehand and frozen, or collected on the same day as the eggs. Normally a single aspiration will provide enough sperm for a number of ICSI cycles and the spare samples are frozen for future use.

Before being selected and picked up with a fine glass hollow needle (pipette), the sperm is examined for normal appearance and viability.

v) Injection of a single sperm directly into the egg

The egg is held by one pipette to keep it stable and a second pipette, containing a single sperm is used to penetrate the egg membrane and release the sperm into the body of the egg, figure 3. 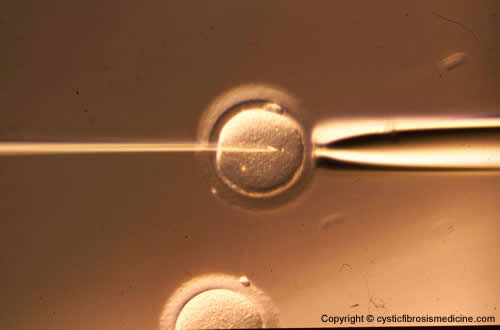 Figure 3: Injection of a single sperm into the body of the egg.

Figure 4. Embryo has divided into 4 cells

What is the success rate of ICSI?

Fertilisation rates are about 60% (Hubert et al, 2006), but not all fertilised eggs will form healthy embryos. The pregnancy rate in Hubert’s programme was 40% per ICSI cycle with 47% of 19 couples having a live born child.

In the UK the Health Service will usually only fund one fresh cycle of treatment, normally including the frozen embryos created in that cycle.

The success rate for ICSI in the UK is 28% per cycle of treatment.

How safe is ICSI?

There may be a one to two percent increased risk of congenital malformation and a lower birth weight when IVF technology is used.

What is the risk of the baby of a man with CF having CF?

The woman will routinely be tested to see if she is a carrier for CF but only the most common genetic mutations are looked for. The couple will be counselled about the risks to the child according to the results. If the woman has none of the common mutations, the risk is about 1 in 200.

What if the partner is a carrier of the CF gene?

If the partner is a CF carrier then the risk of having a baby with CF would be 50% and ICSI would not be carried out without pre-implantation genetic diagnosis (PGD). This test is only available in a small number of specialist units.

• ICSI is successful in about 50% of cases

• Most women with CF become pregnant without any difficulty

Sawyer SM, Farrant B, Cerritelli B, et al. A survey of sexual and reproductive health in men with cystic fibrosis: new challenges for adolescent and adult services. Thorax 2005; 60: 326-330. [PubMed]