Some patients can become chronically colonised with an environmental fungus called Aspergillus fumigatus. A. fumigatus can act as an allergen and induce a hypersensitivity reaction in the lungs of patients with cystic fibrosis (CF) known as allergic bronchopulmonary aspergillosis (ABPA), (Becker et al, 1996; Neuveglise et al, 1997; Wojnarowski et al, 1997). This is often associated with increased respiratory symptoms, (mainly wheeze), mucus plugging, blood eosinophilia and non specific infiltrates or segmental collapse on chest X-ray. This can have detrimental effect on lung function and early recognition is important in preventing long term complication (Kraemer et al, 2006). The diagnosis is based on a combination of clinical, radiological and laboratory features (Stevens et al, 2003). The reported prevalence in Europe is 7.8% (Mastella et al, 2000). It is lower (2%) in the USA but probably under diagnosed (Geller et al, 1999). Prevalence also appears to be on the increase (Skov et al, 2005). Individuals with ABPA often respond well to oral prednisolone (Simmonds et al, 1994) but corticosteroid use increases the risk of diabetes mellitus, osteoporosis and impaired growth. These risks may be partly offset by using antifungal therapy.

Studies suggest that itraconazole, an antifungal agent, may be beneficial and allow for lower steroid doses in the treatment of ABPA (Denning et al, 1991; Salez et al, 1999; Stevens et al, 2000; Skov at al, 2002; Stevens et al, 2003). However, it is poorly absorbed when given orally to people with CF (Conway et al, 2004). More recent studies have suggested voriconazole may be used instead (Hilliard et al, 2005). It has greater bioavailability than itraconazole but is more expensive and has a significant number of interactions with other drugs. Nebulised antifungal agents such as amphotericin B may be considered when response to conventional therapy is poor (Sanchez-Sousa et al, 1996). Further studies are needed to determine the optimum use of antifungal agents for the treatment of ABPA. Beware of other causes of blood eosinophilia such as drugs, Churg Strauss, Wegeners, worms and tropical eosinophilia (Peckham et al, 2001 ).

Characteristic features of ABPA include 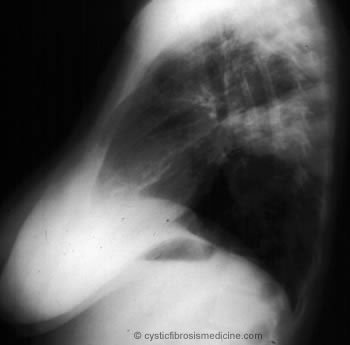 Figure 1. CXR of a patient with CF and ABPA. Collapse/consolidation of apical segment of right lower lobe

Figure 2a. Right upper lobe collapse due to ABPA

Figure 2b. Resolution of right upper lobe collapse after treatment of ABPA

Other complications of A. fumigatus in people with CF have also been described. Shoseyov et al, recently reported six cases of Aspergillus bronchitis which did not fulfil diagnostic criteria for ABPA but responded to antifungal therapy (Shoseyov et al, 2006). Aspergillomas (Maguire et al, 1995; Chow et al, 2002) and invasive pulmonary aspergillosis (Chow et al, 2002) have been reported, the latter being more likely post lung transplantation (Carby et al, 2004). These conditions have been treated successfully with systemic antifungals such as liposomal amphotericin B, voriconazole and caspofungin.

It is also important to assess environmental exposure. Aspergillus species are found in soil, water, dust and vegetation. Activities such as cleaning out stables or occupations in the construction industry may therefore increase the risk of colonisation and infection with Aspergillus. We have seen several cases associated with knocking down walls in, and building extensions to, the family home.

Other fungi are increasingly recognised as complicating CF care. Scedosporium apiospermum is frequently isolated from respiratory samples and has been associated with a symptom complex similar to ABPA (Cimon et al, 2000). Unlike Aspergillus species it has been difficult to isolate from the environment. Patients can become chronically colonised with the same strain (Defontaine et al, 2002) which can persist in spite of antifungal therapy. It is also capable of causing invasive disease with high mortality post lung transplant (Symoens et al, 2006). Therapy is compromised by its resistance to many antifungal agents, including itraconazole and amphotericin B (Espinel-Ingroff et al, 2005). Many isolates appear susceptible in-vitro to voriconazole (Lewis et al, 2005; Espinel-Ingroff et al, 2005), but voriconazole treatment in patients (Symoens et al, 2006) and in animal models (Capilla & Guarro, 2004) has been associated with a lack of clinical response. In-vitro data suggests that posaconazole may be an effective treatment (Espinel-Ingroff et al, 2005). Another fungus increasingly observed is Exophiala dermatitidis but its significance in CF remains uncertain (Horre et al, 2004).

If > 80kg, increase daily dose to 70mg od. Reduce dose in hepatic impairment.
Restricted use only on microbiology advice.
Currently not licensed under 18 years.

Patients on combination therapy of itraconazole and inhaled steroids should be monitored regularly for adrenal insufficiency as steroid clearance may be compromised by itraconazole’s inhibition of cytochrome P450 enzymes (Main et al, 2002; Skov et al, 2002).

•Aspegillus can result in Aspergillus bronchitis or invasive aspergillosis.

•The clinical importance of infection with other fungi is uncertain.Scedosporium apiospermum can result in clinical deterioration

Lewis RE, Wiederhold NP, Klepser ME. In vitro pharmacodynamics of amphotericin B, itraconazole and voriconazole against Aspergillus, Fusarium and Scedosporium spp. Antimicrob Agents Chemother 2005; 49: 945-951. [PubMed]