Just as the cells that line the airways of the lungs make sputum (mucus) that is thicker than normal in cystic fibrosis this process also occurs in the nose. Many cystic fibrosis patients develop chronic problems with the nose and sinuses in particular chronic sinusitis and nasal polyps.  About 1 in 2 people with cystic fibrosis have nasal polyps

What are the sinuses?

The sinuses are small, air-filled spaces inside the cheekbones and forehead. They make some mucus which drains into the nose through small channels.

What are nasal polyps?

Nasal polyps are soft fleshy swellings that grow inside the nose. They may be yellowish, grey or pink in colour. They are common and non-cancerous (benign). Nasal polyps can vary greatly in size. There may be only one but sometimes several grow like a small bunch of grapes on a stem. Polyps can also grow in the sinuses. The lining of the sinuses is the same as the lining of the nose, so this is why polyps can also form in the sinuses.

What are the symptoms of nasal polyps / chronic sinusitis?

Initially you might think you have a cold. This is because a blocked or runny nose is a common symptom in viral infections like colds. Colds usually only last 2-14 days and the symptoms improve on their own. If you have nasal polyps, the symptoms will not get better without treatment.

Other symptoms that sometimes occur include:

Do I need any tests?

An ENT surgeon can usually diagnose nasal polyps/ sinusitis  based on your symptoms and on examination of your nose (and perhaps your sinuses).

Large polyps may be easily visible through your nostrils. Smaller polyps and polyps in the sinuses are not visible via the nostrils. In such cases, the ENT specialist will pass a small flexible telescope with a camera on it (an endoscope) into your nose. This procedure is called nasendoscopy. It allows the extent and location of the polyps to be assessed as well as nay sinusitis

Occasionally a CT scan or MRI scan may be needed. These scans may show more detail about where the polyps / sinusitis are and what effects they might have had on other parts of the face, sinuses and skull.

What are the treatments for nasal polyps and sinusitis?

Everyone with nasal polyps and sinusitis should try treatment with medicines, before considering.  Medicines might be topical (for example, drops and sprays), or tablets.

Nose drops that contain steroid medicines reduce inflammation in the nose. Gradually, nasal stuffiness reduces and the polyps shrink. Drops may take a week or two to make any obvious difference to your symptoms. You will probably be advised to use them for at least 4-6 weeks.

It is important to use the drops exactly as prescribed every day for the best chance of success. 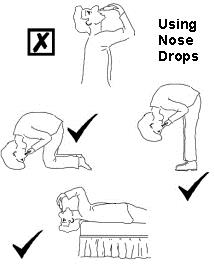 The best way to insert the drops is by lying on a bed with your head falling back off the edge of the bed.

Unfortunately nasal polyps are prone to recur. Steroid nasal sprays can be used regularly, long-term, to try to prevent further polyps from developing.

These include nasal irritation, sore throat and nosebleeds. About 1 in 10 people using these medications will experience one of these symptoms. Some people are sensitive to a preservative called benzalkonium chloride, found in all all nasal steroid treatments (drops and sprays). This preservative can cause irritation of the lining of the nose.Some side-effects are caused by not using the treatments correctly. It is important to follow the instructions carefully.

Patients who have raised pressure in the eye (glaucoma) should be monitored more closely when using steroid nose sprays or drops. This is because of a small chance of increasing the pressure within the eyes – raised intraocular pressure (IOP).

Occasionally long courses of low dose antibiotics are recommended for patients with chronic rhinosiusitis with or without nasal polyps.

An operation may be advised if polyps are large, or if steroid nose drops or tablets have not worked to improve the sinusitis