Bronchial artery embolization therapy for the management of haemoptysis

Mild to moderate haemoptysis frequently occurs in patients with cystic fibrosis and is associated with disease progression. Severe haemoptysis is more uncommon and large CF centres will only see a few cases each year. Although the precise definition of severe haemoptysis varies widely in the literature (200 to 1000ml/24 hours) it is usually defined as the expectoration of > 600ml of blood in 24 hours (Colice, 1996; Corey & Hla, 1987; Jean-Baptiste, 2000).

The presence of chronic airway inflammation in patients with cystic fibrosis leads to haemoptysis. This process causes hypertrophy of the bronchial arteries and new vessel formation (angiogenesis). This hypervascularity and extensively damaged parenchyma predisposes towards haemorrhage especially during a pulmonary exacerbation (Brinson et al, 1998).

Attempting to quantify the amount and duration of haemoptysis will aid in determining its severity. Often, patients can localize bleeding to one side of the chest through experiences of ‘gurgling’ or ‘ a funny feeling’ prior to each episode of haemoptysis. In several studies, unilateral embolization has been shown to stop bleeding in over 95% of cases where patients complained of localizing symptoms ( Cohen et al, 1990; Tonkin et al, 1991; Brinson et al, 1998).

Most cases of haemoptysis follow infective exacerbations and an accurate history helps to guide therapy. A detailed history of medication will identify any agents that may potentially interfere with haemostasis. This includes the use of certain semi-synthetic penicillins which has potential for platelet dysfunction (Burroughs & Johnson, 1990; Pastakia et al, 1993) . In cases of chronic or slowly increasing haemoptysis, interference with lifestyle or effective home management (including postural drainage) is often an indication for bronchial artery embolization following failure of conservative measures (Cohen et al, 1990). A full clinical examination will determine the patients cardiorespiratory status and help exclude other possible sources of blood loss.

A full blood count, coagulation profile, electrolytes, renal and liver function, arterial blood gases, blood typing and cross match should be carried out. It is usually recommended that four to six units of blood be available because of the potential blood loss from the bronchial arteries. Malabsorption of fat-soluble vitamins, specifically vitamin K often predisposes patients with CF to coagulation abnormalities. It is important that the prothrombin time is checked and corrected with vitamin K or fresh frozen plasma if necessary.

Sputum should be sent and an appropriate antibiotic combination started. Sputum should routinely be examined for mycobacterium and fungi, both potential causes of severe haemoptysis in CF patients.

Chest radiography may produce fine reticulonodular patterns indicating underlying intra alveolar bleeds. This feature is fairly accurate in determining the site of bleeding when presenting as a focal infiltrate (Naidish et al, 1990). Alternatively, the presence of a new area of ‘severe disease’ is helpful in localizing the site of bleeding (Brinson et al, 1998). Chest radiographs however, often fail to localize bleeding. Computed tomography is not very sensitive for localizing haemorrhages. It is sometimes advocated in those cases where symptoms and chest radiography are not helpful (Naidish et al, 1990; Set et al, 1993).

Bronchoscopy may sometimes be helpful to determine the site of bleeding. Although earlier studies advocate its use as the primary method for localizing the site of bleeding, more recent studies have placed less importance on this (Porter et al, 1983; Trento et al, 1985; Naidish et al, 1990 ). Fibreoptic bronchoscopy can be performed at the patient’s bedside and may reach the fifth or sixth bronchial orifice (Dail & Hammar, 1988). A large amount of blood in the airways often makes it difficult to visualize the site of haemorrhage (Brinson et al, 1998). Rigid bronchoscopy on the other hand has a greater suctioning ability and can maintain airway patency. However it remains a poor diagnostic tool, as it is impossible to visualize peripheral sites and the upper lobes (Conlan & Hurvitz, 1980). Bronchoscopy like CT tends to be reserved for those cases where symptoms and chest radiography do not prove helpful.

All patients with severe haemoptysis should ideally be managed on a high dependency or intensive care unit. Vital signs and oxygen saturation are constantly monitored and high flow oxygen administered when required. Worsening hypoxaemia is an indication of bleeding affecting an expanding alveolar territory. The patient is placed on lateral decubitus with the bleeding lung down to try to keep the unaffected lung free of blood. This belief is rather theoretical and has not been challenged by controlled studies (Jean-Baptiste, 2000). The circulation is supported with intravenous colloids and/or blood. If pulmonary exacerbation is suspected, patients should be treated with a combination of synergistic antibiotics (Cohen et al, 1990; Brinson et al, 1998).

Bronchial artery embolization (BAE) was first performed by Remy et al in 1973 (Remy et al, 1974). It is now regarded as perhaps the most effective non-surgical treatment in severe haemoptysis. BAE in conjunction with medical management is the treatment of choice for severe haemoptysis in cystic fibrosis centres.

1. Major haemoptysis greater than 300ml in 24 hours accompanied by ongoing haemoptysis at a lower daily or near daily rate

2. Mild or chronic haemoptysis that interferes with lifestyle

Bronchial artery embolization is a technically demanding procedure that carries significant risks and requires an angiographer experienced in embolization techniques. The anatomy of the bronchial circulation is variable and it can be valuable to begin the study with a descending thoracic aortogram as this will, in some cases, demonstrate the origins of the bronchial arteries, however selective catheterisation is essential for adequate diagnostic angiography. The most frequent arterial supply is a single intercostobronchial trunk on the right with two bronchial arteries arising directly from the aorta on the left. Failure to opacify the bronchial arteries on an aortogram does not exclude a significant bronchial artery supply and a thorough search of the aorta with a selective catheter is essential. Systemic supply from the subclavian, internal mammary and inferior phrenic arteries is common and selective catheterisation of these vessels is mandatory for a full evaluation. In selected cases, for example when the initial study has been negative despite a diligent search for feeding vessels, pulmonary angiography should be performed.

Often, angiographic evaluation is directed toward one lung in patients who can localize the site of bleeding symptomatically. This approach may also be adopted when chest radiographs show evidence to localize the site of bleeding. Some authorities advocate that in the setting of acute haemoptysis, all angiographically visible bronchial arteries to both lungs should be embolized (Fellows et al , 1979; Sweezy et al, 1990; Cipolli et al, 1995) . Others suggest a more selective approach with embolization being directed to the lung most suspected (Cohen et al, 1990). Comparative studies have claimed bleeding control rates of around 85% in cases where selective embolization was performed initially (Cohen et al, 1990; Brinson et al, 1998). This compares favourably to the 88% rate of bleeding control achieved with aggressive embolization of all visible bronchial artery supply in both lungs (Sweezy et al, 1990). Direct evidence of bleeding indicated by contrast extravasation from a hypertrophied bronchial artery is rarely seen at angiography.

When trying to determine the site of haemorrhage, the angiographer relies on various signs such as the size of vessel, degree of hypervascularity, intensity of the vascular blush and evidence of vascular shunting (Cohen et al, 1990; Sweezy et al, 1990; Brinson et al, 1998). Theoretically, every possible vessel contributing to bronchial artery supply should be embolized . However each additional vessel that is catheterised and embolized increases the risk of the procedure. A wide variety of embolic materials have been used for bronchial embolization including polyvinyl alcohol particles, isobutyl-2-cyanoacrylate, absorbable gelatin pledgets or Gianturco steel coils (Cremashi et al, 1993; Zhang et al, 1994). The most frequently used agent is polyvinyl alcohol particles (225- 500 microns) which are suspended in X-ray contrast medium and cause direct vascular occlusion of small arteries on injection. Proximal coil embolization is generally inappropriate as the distal vascular bed may continue to be supplied by adjacent bronchial arteries or non-bronchial collateral arteries branching from the phrenic, intercostals, mammary and subclavian arteries (Cowling & Belli, 1995).

Embolization of bronchial arteries is associated with significant potential complications. These include severe chest pain, dysphagia, bronchial necrosis, bowel ischaemia and paraplegia (Tonkin et al, 1991). Recent reports have demonstrated that the incidence of many of these complications is low with the use of non-ionic contrast material and in the hands of a skilled interventional radiologist (Remy et al, 1974; Cipolli et al, 1995; Brinson et al, 1998). Transient chest pain and dysphagia appear to be the most common complication reported (Sweezy et al, 1990). Paraplegia resulting from embolization of a spinal artery is perhaps the most feared complication. The reported prevalence is low (<1%) and it occurs when the spinal artery arises from the bronchial artery circulation (Zhang et al, 1994). Even in the hands of the most diligent angiographer the identification of such vessels can be difficult as they are considerably smaller than the adjacent hypertrophied bronchial arteries and may only be transiently visualised during angiography. Selective catheterisation and contrast injection for angiography alone without embolization may rarely cause neurological deficiencies, but these are usually transient (Brinson et al, 1998; Tonkin et al, 1991). Particular care with continuous fluoroscopy during embolization is essential as a spinal artery may become visible only as the distal bronchial vascular bed is occluded. The presence of such a vessel is not an absolute contraindication to BAE (Tonkin et al, 1991; Schidlow et al, 1993; Brinson et al, 1998) as embolization may be performed distal to the spinal artery origin using microcatheter techniques. Nevertheless, the possibility of a permanent deficit exists and is worrying. It is therefore important that each situation is evaluated and the importance of bleeding control be weighed against the possible neurological side effects.

Other methods of controlling haemoptysis include surgery and endobronchial tamponade (Jean-Baptiste, 2000). Surgery is currently reserved for those cases where BAE fails to achieve control of haemoptysis. Bronchial artery embolization has been shown to be a safe and reliable method of treating haemoptysis in patients with cystic fibrosis. It is now recommended in cases of severe haemoptysis when conservative therapy fails to provide prompt relief. 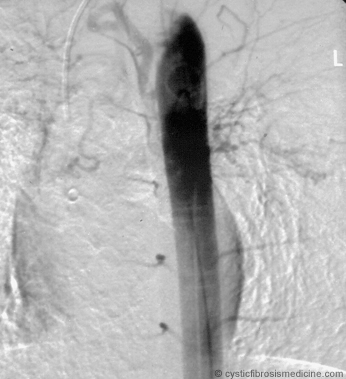 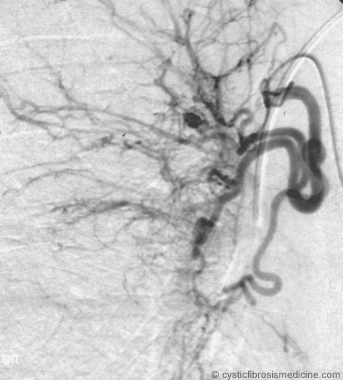 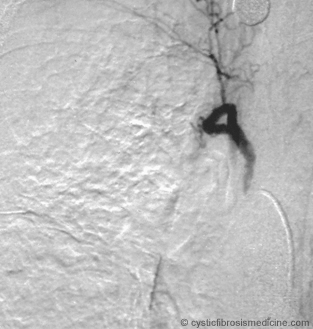 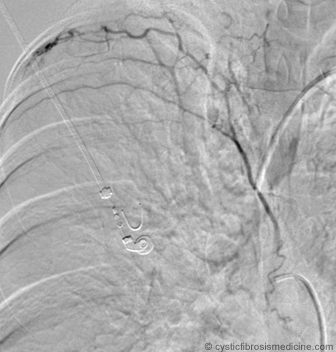 Marshall TJ, Flower CD, Jackson JE. The role of radiology in the investigation and management of patients with haemoptysis. Clin Radiol 1996; 51: 391-400. [PubMed]