To assist in the evaluation of difficult cases a complete bioelectrical profile should be carried out. This includes basal potental difference, response to perfusion with amiloride and to chloride free solution in conjunction with isoprenaline. Similar electrophysiological tests can be performed across small bowel mucosa using an ussing chamber.

Because epithelia are “electrically tight” (i.e. they have a resistance across them), the active secretion or absorption of charged salts such as sodium (Na+) and chloride (Cl-) ions causes a potential difference or voltage (Gatzy, 1967). Different epithelia have different ion transport characteristics and the magnitude of PD varies, depending on the site of measurement. Potential difference can be measured by using a high impedance voltmeter between two electrodes, one on the inside and one on the outside of the epithelia. The electrode on the outside (the exploring electrode) rests against the surface of the target epithelium. The internal electrode (the reference electrode) can be in any internal compartment of the body, although generally the subcutaneous tissue of the forearm is used. On paper this appears straight forward, however in practice, some skill and a good deal of experience are required to achieve accuracy and repeatability with this method.

The nasal cavity is accessible which makes it a good site to examine the ion transport characteristics of airway epithelia. Less than a centimetre into the nose the squamous (“skin type”) epithelium becomes ciliated pseudocolumnar epithelium, characteristic of the proximal airways (Carson et al, 1981). By employing the nasal PD measurement, Knowles and his colleagues were able to demonstrate that Na+ absorption was the primary ion transport activity in normal airway epithelia (Knowles et al, 1981). The resulting PD is negative when viewed from the outside and in people without CF would be of the magnitude of -15 to -25 mV; dependent to some degree on the position in the nose that the PD is measured.

Chloride free solution: When the epithelium is bathed with a solution with low or zero levels of Cl- ions then a potential environment for Cl- secretion is generated. In non-CF epithelia, this results in a rapid and often large hyperpolarisation of the PD, which in the presence of amiloride is assumed to be Cl- secretion.

ATP: The purine ATP activates chloride secretion through alternative “non-CFTR” channels that have yet to be fully characterised (Knowles et al, 1991).

Figure 1. Nasal PD profile from a non-CF subject. The baseline PD is rather low, even for normal, (at around -10mV) and so is the subsequent response to amiloride (perfusion started at point a). The response to perfusion with a solution low in chloride ions is large (point b). This specific response is the best discriminator between non-CF and CF profiles (see later figure). The final perfusion change is the addition of ATP (point c). This is the most variable response in normal epithelia. Some subjects have a consistently large (though transient response). In most cases the response is small. This contrasts to CF subjects, in whom the response to ATP is generally large (although again transient).

Figure 2. Nasal PD profile from a CF subject. The baseline PD is high (at around -50mV) and the subsequent response to amiloride is large (perfusion started at point a, nearly 30 mV). The response to perfusion with a solution low in chloride ions (point b) is small and demonstrates the “falling away” that is characteristic of CF. The final perfusion change is the addition of ATP (point c). In CF this generally (although not always) leads to a large response, which after an initial peak falls away. Many have advocated adding ATP (or another purine) at the end of the PD measurement as an indicator of epithelial integrity. For example, the finding of a normal or low baseline and a small response to a low chloride solution may be related to epithelial inflammation (for example, if the subject has a cold). However, if there is a subsequent large response to perfusion with ATP this would argue against that and make the result more worrying.

The change in PD with the perfusion of different solutions is demonstrated. It can be seen, therefore, that by employing nasal PD protocols with perfusion of different solutions and drugs, different aspects of the nasal ion transport characteristics can be examined. In CF, this ion transport profile is abnormal and the nasal PD measurement has a number of features that characterise CF from non-CF.

Much work has been published characterising the CF nasal PD profile in adults and some work is beginning to emerge on children (Munck et al, 1999; Southern et al, 1999). People with CF have a much larger baseline PD (i.e., more negative) than non-CF. They also have an increased reduction in the magnitude of PD following perfusion with amiloride. This suggests that increased Na+ absorption is a primary defect in the CF airway. Other work on ex vivo models (animal and tissue culture) has confirmed Na+ hyperabsorption in CF airway epithelia. Recently this has been demonstrated to be an important factor in the pathophysiology associated with CF airways. The large baseline PD and amiloride response in CF are impressive, however the most consistent abnormality in the CF nasal PD profile is the response of the PD to perfusion with a zero or low chloride solution. In contrast to the large sustained response in non-CF epithelia there is an initial small response in CF epithelia, which then returns to previous levels. There is some evidence to suggest that the addition of a beta-agonist, such as isoprenaline, increases the differentiation between CF and non-CF (Middleton et al, 1994; Knowles et al, 1995). The addition of ATP or another purine to the low chloride solution does lead to a large, if transient hyperpolarisation in CF tissues, presumably through non-CFTR mediated chloride secretion. The initial recognition of this response resulted in the examination of purinergic agents as potential therapies for CF (Olivier et al, 1996).

In summary, it can be seen that by employing a perfusion protocol both sodium and chloride epithelial transport can be examined, both of which are characteristically abnormal in CF.

Some comments on methodology

In contrast to say the sweat test, there is no internationally accepted method for measuring nasal PD. Papers have described perfusion protocols but the practicalities of the test vary considerably between different groups. Examples are; type and position of reference electrode, single or double lumen catheter, the temperature of perfusates, Silver Chloride (AgCl) or calomel electrodes, which part of the nasal epithelia to measure, what specific perfusion solutions to use, the dose of amiloride etc. Each investigator tends to remain loyal to their method (or modify another). This is probably not a significant problem as long as methodology is stated clearly in papers, in order that data can be critically evaluated. One aspect that is significant is the site of measurement. In his initial work Knowles measured PD along the inferior aspect of the inferior turbinate, as preliminary studies suggested this to be the area of highest PD (Knowles et al, 1981). This is an area rich in ciliated epithelial cells, in contrast to the anterior portion or tip of the turbinate where the epithelia is more squamous in nature and the PD lower (Carson et al, 1981). Many workers have followed this example. However, others, predominately in Europe have employed measurements along the floor of the nasal cavity. Here the baseline PD is significantly less, although data suggest that low chloride responses are equally large in non-CF subjects. Certainly measurements along the floor are technically much more straightforward and therefore possibly more repeatable. There is significant variability in the PD measurement (both intra and inter personal) and care must be taken not to over interpret results, particularly with small differences between groups. What makes nasal PD a useful test is the extent of difference between CF and non-CF. Various parts of the nasal PD profile are characteristically abnormal. Analysing the whole of the PD profile is therefore of more value than individual components. It is important to remember that the magnitude of baseline PD can be reduced with inflammation. Certain drugs and exercise also affect the baseline PD (Alsuwaidan et al, 1994; Peckham et al, 1995; Middleton et al, 1996) 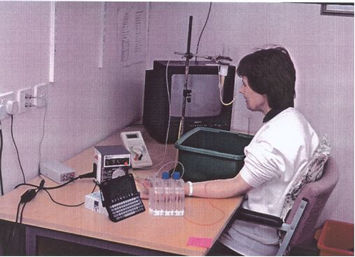 Measurements on children and infants have previously employed adult methods (Gowen et al, 1986; Sauder et al, 1987; Wilson et al, 1998). However groups are now developing techniques that are far better suited to the paediatric population (Munck et al, 1999). These methods use smaller, often single lumen catheters with much lower perfusion rates (0.2 ml min-1 compared to up to 5 ml min-1 with the adult method Shorter protocol times have also been advocated making the test tolerable for even the smallest child (although obviously some degree of cooperation is necessary and therefore measurements in children less than five remain difficult). Perfusion measurements are possible in newly born infants. Obviously this opens up the potential for using PD as a diagnostic test. This is important as the diagnosis of CF is often difficult to make or refute in babies because of the problems in collecting enough sweat and because mutational analysis is often negative.

The nasal PD measurement provides a tool for examining the fundamental defect in CF, namely the abnormality of salt transport across the airway epithelia. As such nasal PD has increased our understanding of CF and allowed correlations between disease severity and ion transport. In addition this measurement has provided a valuable diagnostic tool and efficacy measure for new therapies.