The Genetics of Cystic Fibrosis

The chromosomes contain around 35,000 genes. These genes are made up of segments of DNA and are the body’s blueprint for the manufacture of proteins. The latter are the body’s essential building blocks. Each gene comes in as a pair, one inherited from the mother and the other from the father. The exception being those genes on the X chromosome. 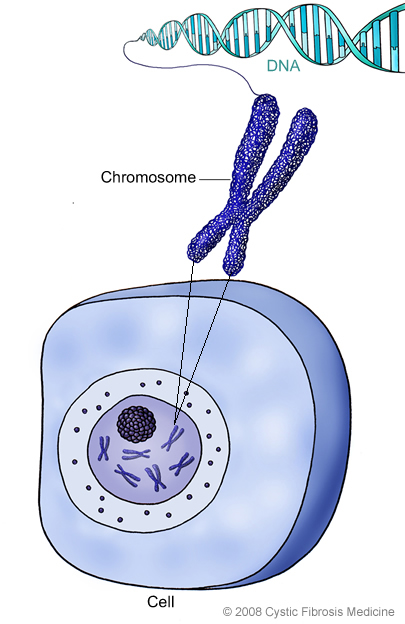 Cystic Fibrosis is one of the most common life threatening genetically inherited conditions affecting Caucasians. In the UK, the incidence is about 1/2,500 live births and about one in every 25 people is a carrier. It is uncommon in people from Asia or Africa in whom the prevalence of CF may be as infrequent as 1/90,000. The high prevalence of the CF gene in certain populations has led to speculations that there may be some heterozygote (carrier) advantages (Gairdner, 1975; Jorde & Lathrop 1988; Pritchard, 1991). It has been postulated that carrier status may be linked to improved survival (less chloride loss with diarrhoea) following infections such as cholera and typhoid. The evidence is conflicting.

In 1985 the gene was localised to 7q21-34 on the long arm of chromosome 7 (Wainwright et al, 1985). The gene sequence was identified in 1989 (Rommens et al, 1989; Riordan et al, 1989; Kerem et al, 1989) and shown to encode a 1480 amino acid protein, which has been named the cystic fibrosis transmembrane conductance regulator or, for short, CFTR. (If you imagine the CFTR protein as a long line of bricks, then each amino acid is a single brick. If any of these bricks are missing or abnormal, then the protein may not work properly). More than 1500 CF mutations have been reported, many of which are rare and some of which may not result in clinical signs or symptoms. The various mutations affect the function of CFTR in different ways. Some result in abnormal CFTR production and others affect the intracellular processing of CFTR, channel function or a combination of these (Zielenksi & Tsui, 1995).

The most common mutation worldwide is delta F508, which occurs in 75% of patients with CF in the UK. A three base-pair deletion in exon 10 of the CFTR gene results in the omission of phenylalanine (one of the bricks) at position 508 in the 1480 amino acid chain. A mutant CFTR protein which cannot be folded into its proper shape is produced. The quality control mechanisms within the cell destroy this abnormal protein before it can reach the cell surface where its major normal function is to act as a channel through which chloride ions can pass in and out of the cell. In other ethnic groups the range of mutations are different e.g. in Ashkenazi Jews delta F508 accounts for 27% and W1282X for 51% of the mutations (Kalman et al, 1994).

Mode of inheritance and risk of passing on the CF gene 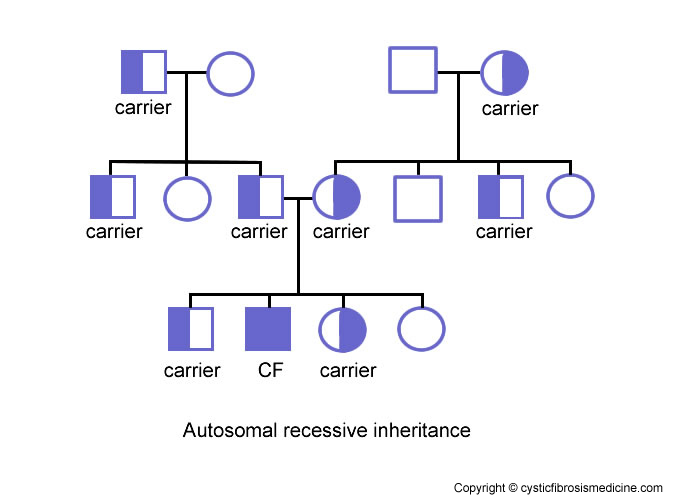 CFTR is a protein that is found in various cell types, including lung epithelium, submucosal glands, pancreas, liver, sweat ducts and reproductive tract. It comprises two membrane-spanning domains and two nucleotide-binding domains separated by a regulatory R domain. The two membrane-spanning domains form a low-conductance chloride channel pore (figure 3). This is regulated by the binding and hydrolysis of ATP at the nucleotide-binding domains following initial phosphorylation of the R domain. CFTR also regulates ion transport. It has inhibitory effects on apical sodium permeability across epithelial surfaces and activates non-CFTR chloride channels.

The widespread presence of CFTR throughout the body (the lungs, salivary glands, pancreas, liver, sweat ducts and reproductive tract) helps to explain why CF is a multisystem condition affecting many organs. The two major systems affected, however, are the lungs and the gastrointestinal tract.

In the lungs, impaired CFTR function causes defective chloride transport across the apical membrane and enhanced sodium absorption through epithelial Na+ channels (ENaC) and basolateral Na/K ATPase pumps. These changes in ion transport lead to a net increase in water absorption, a reduction is the depth of airway surface liquid and impaired ciliary clearance. Impairment of the CFTR protein has also been linked to defective bacterial adhesion and reduced clearance and phagocytosis (destruction) of bacteria, such as Pseudomonas aeruginosa. 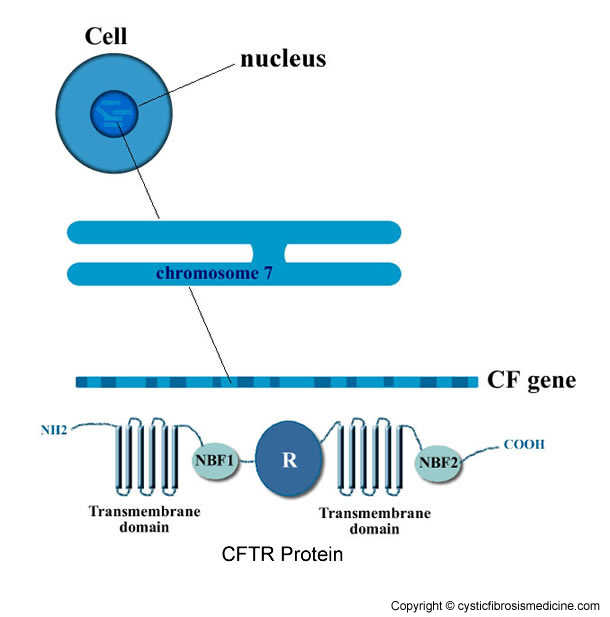 Figure 3. The CF gene is located on the long arm of chromosome 7. The gene sequence encodes a 1480 amino acid protein, which has been named the cystic fibrosis transmembrane conductance regulator or, for short, CFTR. This protein acts as an important ion channel which regulates the hydration of airway surface liquid.

Subsequent to identification of the mutant gene there has been a dramatic increase in our understanding of the genetics of CF. Different gene mutations result in different levels of disease severity, as the amount of functioning CFTR protein produced appears to be related to clinical status (table 1). For example, male infertility which results from failure of embryonic development of the vas deferens (the tube that carries sperm from the testis to the penis) may be the only clinical symptom of a mild CFTR gene mutation (Davis et al, 1996; Massie et al, 2001).

Table 1: Relationship between the amount of functional CFTR produced and phenotypic (clinical) expression.

There are various mechanisms by which mutations in the CF gene produce quantitative or qualitative changes in CFTR function. Seven functional classes of CF mutations are described (Zielenksi & Tsui, 1995), (table 2, figure 4). In the future, recognition of the different classes of gene mutations may be important in planning treatment. Drugs presently being researched have the potential to overcome the effect of the gene defect (correctors), or to maximise the function of the defective CFTR (potentiators) so that it is able to work effectively. Different drugs are being developed to target the various class 1 – 5 mutations. 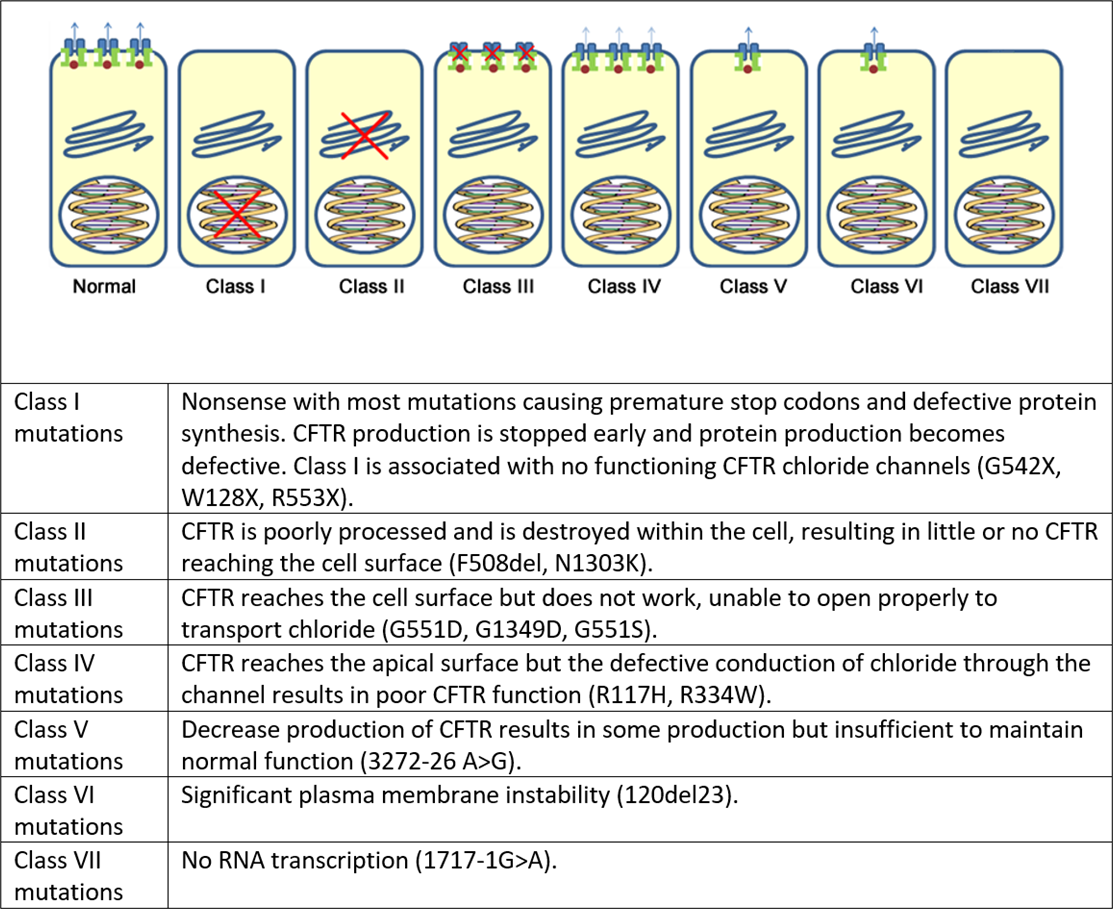 Table 2: There are various mechanisms by which mutations in the CF gene produce quantitative or qualitative changes in CFTR function. Seven functional classes of CF mutations are described.

Since the introduction of sweat testing, atypical individuals with some features of CF but with normal or borderline sweat tests have been reported. Clinical symptoms and signs in these people include mild lung disease (Gan et al, 1995), pancreatitis (Cohn et al, 1998) and congenital bilateral absence of the vas deferens (CBAVD), (Dumur et al, 1990). We now recognize that the spectrum of mutations in the CFTR gene gives rise to a very variable phenotype (clinical picture) that may not be predictable from the individual’s genotype (gene mutation). It is believed that environmental factors and the influence of other modulator genes affect the ability of the CFTR genes to express their full disease potential.

Some CFTR mutations may act with other mutations on the same allele (i.e. the degree of clinical illness caused by the CFTR gene mutation may depend on another closely related genetic variant on the same bit of the chromosome). An example of this is exon 9 splicing which is influenced by the polythymidine sequence of intron 8 (Massie et al, 2001). The polythymidine tract is situated in intron 8 near the splice site for exon 9. The shorter the polythymidine tract, the more often exon 9 is skipped from CFTR mRNA. Transcripts missing exon 9 result in a protein with no chloride channel activity. Because CFTR protein missing exon 9 is non functional and exon-9 splicing is inversely proportional to the length of the thymidine sequences, the 9T variant allows normal splicing while the 5T variant is associated with the highest level of non-functional CFTR (e.g. more CFTR missing exon 9)

The commonest polymorphism is the seven thymidine (7T) variant and the delta F508 mutation occurs exclusively on the 9T variant. This variation may be important in some CFTR mutations e.g. R117H. The presence of R117H/delta F508 on a background of 5T is associated with an elevated sweat test and clinical CF. R117H in association with 7T may result in normal, borderline or elevated sweat values and a variable clinical presentation (Kiesewetter et al, 1993; Rave-Harel et al, 1997; Massie et al, 2001; Peckham et al, 2006).

When the delta F508 gene was identified in 1989 clinicians hoped that genetic testing would provide a sensitive and specific diagnostic test. Unfortunately this has not proved to be the case. In most cases if a patient has two known CF mutations then this confirms the diagnosis. There are, however, more than 1500 different CF mutations and in routine practice it is only possible to check for approximately 100 of these. For an up-to-date register consult the world wide web site at http://www.genet.sickkids.on.ca/cftr. It is therefore possible to confirm the diagnosis of CF by means of the genotype but not possible to exclude it. There are some mutations which may not be enough alone to confirm the diagnosis.

Incidence of cystic fibrosis mutations in the Yorkshire population (UK)

The screening of CFTR mutations is used in the diagnosis of CF. The presence of two mutations known to cause CF indicates that the individual has CF. The finding of only one mutation or no mutations does not exclude the diagnosis.

The laboratory will be able to test a variety of samples e.g. saliva, dried blood spots, blood and solid tissue. The usual sample is 5-10mls of blood in EDTA. Unless there are already arrangements to use other tissue then the type of sample should be discussed with the laboratory

• Carriers have only one mutant gene. The other normal gene ensures that there is enough functional CFTR protein for normal health

• Depending on the amount of CFTR protein produced, clinical disease can vary from very mild to very severe