1907 Lockhart-Mummery P. Prolapse of the rectum in children, with fifty cases. Brit Med J 1907; 2:812.
A common disorder among children, writes Mr. Lockhart-Mummery a distinguished London surgeon, “especially that class which attends the surgical practice at a children’s hospital”. He had seen examples of the usually quoted causes of rectal prolapse (phimosis, stone in the bladder, colonic polyps, etc) to be rare but chronic diarrhoea, wasting and general weakness to be common – particularly the removal of fat from around the rectum in such cases.

Unfortunately there is no mention of long term outlook of these children that may have suggested some may have had CF; however, the fact that the average age was 2.56 years perhaps indicated that prior to 1907 most children that had a prolapse due to CF would have already died. Also in 1907 death in early childhood from gastroenteritis was relatively common as was malnutrition and wasting.

Subsequently rectal prolapse was described as a feature of CF (Kulczycki & Shwachman, 1958 below). The lack of fat around the rectum, as suggested by Lockhart-Mummery, is obviously relevant in CF for when this is restored with appropriate pancreatic enzyme treatment the tendency to rectal prolapse diminishes – usually completely.

In over 600 children and young people with CF I only recall one teenage girl who still complained of rectal prolapse occasionally. However, one wonders if persistence of this embarrassing problem is under-reported as was later found to be the case with urinary incontinence in people with cystic fibrosis (Cornacchia et al, 2001 below). (Illustration of severe rectal prolapse in Kulczycki & Shwachman, 1958 in main text).

1952 Lloyd MS, Robitzek EH. Pneumonectomy for suppurative disease. In cystic fibrosis of the pancreas and lung: case report. Quart Bull Sea view Hospital 1952; 13:114-124. [PubMed]
This quite remarkable report, from Staten Island Hospital, New York, is possibly the first of such radical lung surgery in a person with CF for extensive lung damage. The report concerns a boy with CF born in 1935 who had a right pneumonectomy aged 14 years when severely ill and in virtual respiratory failure. After the operation he was said to be considerably improved with an “excellent” physical condition much helped by regular terramycin. Although he had a morning cough there were no added sounds in the remaining left lung (figure 7 in main text).

There have been many subsequent reports of benefit from resection of severely affected parts of the lung in children with CF mostly with good results. At this time, in 1952, surgery was not recommended for non-CF bronchiectasis but the results in this and many subsequent reports are surprisingly good if the patient had cystic fibrosis. In this paper Milton Lloyd observed “the improved outlook achieved by better medical care demands our attitude to surgical therapy be re-examined”. 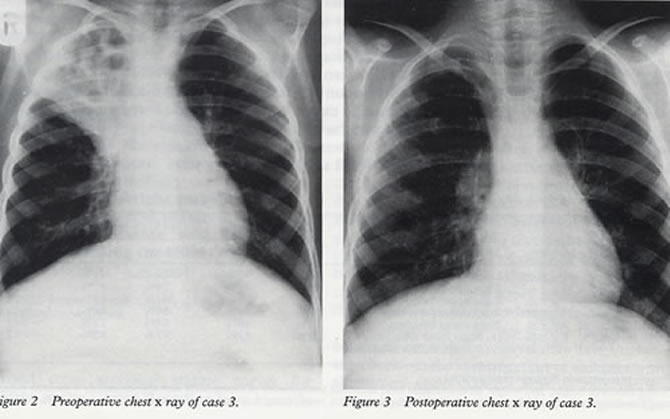 1964 Schuster SR, Shwachman H, Harris GBC, Khan K-T. Pulmonary surgery for cystic fibrosis. J Thorac Cardiovasc Surg 1964; 48:750760. [PubMed]
One of a number of papers on this subject which have appeared since that of Lloyd & Robitzek in 1952 (above) most of which showed surprisingly good results of lung surgery in people with cystic fibrosis. This report concerns surgery for severely affected segments of lungs of 21 patients with CF. Two became symptom free, 13 improved and 3 had poor results including cardiac arrest, eventually fatal collapse of the remaining lung and one had fatal multiple thoracic sepsis.

1972 Mearns MB, Hodson CJ, Jackson ADM, Haworth EM, Sellors TH, Surridge M, France NE, Reid L. Pulmonary resection in cystic fibrosis: results in 23 cases. 1957-1970. Arc Dis Child 1972; 47:499-508. [PubMed]
Another early report showing good results from surgery at a time when many were suggesting surgery should be avoided in children with non-CF bronchiectasis. Twenty three lobectomies or segmental resections were performed. Nine patients were referred from other centres. Twenty one of the 22 survivors had definite benefit and a rather remarkable 16 of the 22 became pathogen free although it is not stated for how long they remained clear. It was advised that surgery should not be done until after six months of conservative treatment.

Authors mention that the late Dr Winifred Young found segmental or lobar collapse could take up to six months to resolve with medical treatment.
The fact that 16 of 22 patients became pathogen free is interesting, surprising and important, perhaps suggesting that the impossibility of eradicating chronic infection could be related to local areas of tissue damage rather than general abnormality of all the respiratory mucosa. The first major lung resection in CF was by Lloyd et al, 1952 (above) then by Schuster et al, (1964 above)

2007 Boesch RP, Acton JD. Outcomes of fundoplication in children with cystic fibrosis. J Pediatr Surg 2007; 42:1341-1344.[PubMed]
Twenty five children with CF underwent fundoplication to treat gastro-oesophageal reflux. 12% had complications that required a subsequent surgical procedure. Although 28% were able to discontinue their anti-reflux medications, no less than 48% developed symptoms of recurrent gastro-oesophageal reflux. Only children who had an FEV1 of less than 60% predicted at the time of fundoplication exhibited an improvement in FEV1 slope.
The complication rate of fundoplication is similar to that reported in large series in children without CF. There is a high rate of recurrent reflux and little apparent benefit for either nutritional or pulmonary outcomes.

An individual child may benefit from the procedure e.g. this child had severe reflux causing uncontrollable vomiting, severe oesophagitis and progressive weight loss. He required fundoplication after which his symptoms and general progress improved (figure 52 in main text).

2009 Huffmyer JL. Littlewood KE. Nemergut EC. Perioperative management of the adult with cystic fibrosis. Anesth Analg 2009; 109:1949-1961. [PubMed]
A useful review article on the optimal perioperative management of patients with CF requires an understanding of the relevant pathophysiology and the unique challenges presented by these patients. The authors reviewed these concepts, including special considerations such as liver and lung transplantation and pregnancy.

2014 Previs RA. Edwards JM. Secord AA. Nucci MR. Bentley RC. Hall AH. Cystic fibrosis involving the cervix, mimicking a well-differentiated adenocarcinoma: a case report. J Gynec Path 2014; 33(1):100-4. 24300542+ [PubMed]
The authors describe clinicopathologic and immunohistochemical features of an unusual case of cystic fibrosis manifesting in the cervix as a mass lesion, mimicking cervical adenocarcinoma. A 24-year-old nulligravida with cystic fibrosis developed heavy postcoital vaginal bleeding 4 months after starting oral contraceptives and was found to have a cervical mass. She underwent a loop electrosurgical excision of the mass, and microscopic examination revealed a florid endocervical proliferation, extending to the margins. This lesion was initially interpreted as an invasive, well-differentiated endocervical adenocarcinoma. However, on subsequent review, the lesion was found to have a low rate of proliferation, no evidence of an infiltrative growth pattern, and abundant acute inflammation. Given these findings and the absence of any residual endocervical lesion on a subsequent cold knife conization, they determined that this was a benign, likely reactive, lesion.

This case, together with previous studies, suggests that women with cystic fibrosis can develop proliferative endocervical lesions and that oral contraceptives may contribute to their development. 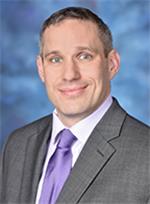 Adult pulmonary and critical care physicians increasingly will be involved in the care of these patients. Patients with CF are at risk for numerous conditions that require ICU admission, including respiratory failure, massive haemoptysis, pneumothorax, hepatic failure, and bowel obstruction. Multiple aspects of the care of patients with CF benefit from specialized knowledge, including pancreatic enzyme replacement and nutritional support; airway clearance modalities; treatment of multiply resistant, polymicrobial infections, and unique drug metabolism. In extreme cases, patients may benefit from advanced therapies, including extracorporeal support and organ transplant.

Optimal care of patients with CF requires a multidisciplinary care team that includes respiratory therapists, dieticians, social workers, psychologists, pharmacists, and physicians who have expertise in the treatment of this complex, multisystem disorder.

– This is still a very important message. For example an instance many years ago involved admission of a person with CF to an ICU for a respiratory indication. Omission of the pancreatic enzyme therapy led to meconium ileus equivalent intestinal obstruction, subsequent treatment of this complication proved fatal. A CF expert should be part of the ICU team.

Background: With advances in medical care, patients with cystic fibrosis are more commonly living into adulthood yet there are limited data describing the need for gastrointestinal surgery and its outcomes in adult cystic fibrosis patients.
Objective: We aim to use a national administrative database to evaluate trends in abdominal gastrointestinal surgery and associated postoperative outcomes among adult cystic fibrosis patients.
Design: This was a national retrospective cohort study.
Setting: A national all payor administrative database from 2000-2014 was used.
Patients: Patients included all adult (age ≥18) patients with cystic fibrosis undergoing abdominal gastrointestinal surgery.
Main outcome measures: The primary outcome was trend over time in number of surgical admissions. Secondary outcomes included morbidity and mortality by procedure type.
Results: We identified 3,075 admissions for abdominal surgery of which 28% were elective. Major GI surgical procedures increased over the study period (p<0.01) while appendectomy and cholecystectomy did not demonstrate a clear trend (p=0.90). The most common procedure performed was cholecystectomy (n=1,280; 42%). The most common major surgery was segmental colectomy (n=535; 18%). Obstruction was the most common surgical indication (n=780; 26%). For major surgery, in-hospital mortality was 6%, morbidity 37% and mean length of stay 15.9 days (SE 1.2).
Limitations: The study is limited by a lack of granular physiologic and clinical data within the administrative data source.

Conclusions: Major surgical admissions for adult patients with cystic fibrosis are increasing with the majority being non-elective. Major surgery is associated with significant morbidity, mortality and prolonged length of hospital stay. These findings may inform perioperative risk for adult patients with cystic fibrosis in need of gastrointestinal surgery. See Video Abstract at http://links.lww.com/DCR/B850.