1942 Attwood CJ, Sargent WH. Cystic fibrosis of the pancreas with observations on the roentgen appearance of the associated pulmonary lesions. Radiology 1942; 39:417-425.
The first paper on the chest X-ray findings of four patients with CF who had advanced pulmonary changes. Neuhauser et al, 1946 (below) later described the characteristic radiological changes in CF in two stages as follows – the first of emphysema or atelectasis and the second stage of infection. The former corresponds to the phase of partial or complete obstruction of the bronchi and bronchioles – clinically corresponding to the “early bronchitic phase” with which is associated a pertussis-like cough and precedes the onset of infection, destruction of the bronchial epithelium and bronchiectasis. In the “stage of infection” the hilar shadows are greatly accentuated even to a degree which may obscure the cardiac outline and give the appearance of a fluffy circumcardiac halo. Neuhauser also described shadows in the lung fields characteristic of peribronchial infiltration – often confluent suggesting pneumonia. The characteristic repetitive exhausting “pertussis-like” cough mentioned by these authors will be familiar to all parents and clinicians who have seen infants with CF who have significant chest involvement. 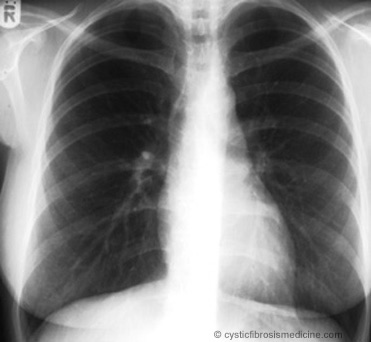 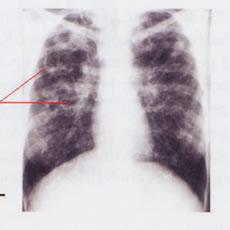 1946 Neuhauser EBD. Roentgen changes associated with pancreatic insufficiency in early life. Radiology 1946; 46:319-328.
Radiological changes described were an increased lung volume causing flattening of the diaphragm, increase in radio-translucency and widening of the intercostal spaces. There was frequent lobular atelectasis and obstructive emphysema. Later there was accentuation of the hilar shadows and bronchovascular markings with irregular emphysema, increased hilar markings atelectasis and pneumonia in the terminal stages (also Atwood & Sergent, 1942 above).

1953 di Sant’Agnese PA. Bronchial obstruction with lobar atelectasis and emphysema in cystic fibrosis of pancreas. Pediatrics 1953; 2:178-190.[PubMed]
This paper describes the classical right upper lobe collapse so characteristic of CF and notes bronchoscopy was usually not effective in expanding the collapsed lobe (however, only rigid bronchoscopes were available at that time). Of 211 children with CF 10% presented with collapse of one or more lobes. In the discussion there was still a lingering suggestion that vitamin A deficiency “may contribute but not a major cause”.

Harry Shwachman agreed that atelectasis worsens the prognosis but also noted “The hypothesis suggesting an imbalance of the autonomic nervous system which may affect many systems and organs is attractive”. So there was still no clear explanation for the various manifestations of the condition; some suspected the autonomic nervous system. With regard to the association of the pancreatic lesions and the pulmonary complications, di Sant’Agnese concludes that “a satisfactory understanding of this problem has not yet been attained” which seemed to sum up the situation.

1955 Keats TE. Generalized pulmonary emphysema as an isolated manifestation of early cystic fibrosis of the pancreas. Radiology 1955; 65:223-226. [PubMed]
Commonly attributed to infection and secondary obstruction, the presence of hyperinflation before infection suggested an intrinsic abnormality of the composition of the airway secretion causing some degree of obstruction. This is now known to be the case since the availability of infant respiratory function studies. Paul di Sant’Agnese confirmed that he had seen isolated emphysema as the only early manifestation of CF when infection had been “held in check” by antibiotics.

Modern paediatricians will have seen this in infants with CF diagnosed following neonatal CF screening who have not yet acquired infection or where infection has been prevented by prophylactic flucloxacillin. In these infants there is some slight airway obstruction in the smaller airways due to the abnormal airway secretions and this is reflected as some over inflation evident on the chest X-ray; some degree of airway obstruction is also evident on infant respiratory function testing (Ranganathan al. 2001 below).

1974 Chrispin AR, Norman AP. The systematic evaluation of the chest radiograph in cystic fibrosis. Pediatr Radiol 1974; 2:101-106.[PubMed]
An important paper and one of the first methods for the objective assessment of the chest X-ray changes in cystic fibrosis. The score is still widely used by clinicians for publications and research. However, in recent years In UK the “Northern” x-ray score (developed by the clinicians of the Northern CF Club in the UK – Conway et al, 1994 below) is now preferred by many as it correlates well with other X-ray scores and does not require a lateral X-ray – this considerably reduces the radiation the patient receives over the years.

1979 Brasfield D, Hicks G, Soong S-j, Tiller RE. The chest radiograph in cystic fibrosis: a new scoring system. Pediatrics 1979; 63:24-29.[PubMed]
A system of X-ray scoring that was quite widely used in the USA. Authors comment that the Chrispin-Norman system (1974 above) was not checked for reproducibility nor correlated with the clinical condition of the patients. The score was further evaluated in a multicentre study (Brasfield D et al. Am J Roentgenol 1970;134:1195-1198). [PubMed] and was found to have “a moderately high level of reproducibility by and among observers”.

1994 Conway SP, Pond MN, Bowler I, Smith DL, Simmonds EJ, Joannes DN, Hambleton G, Hiller EJ, Stableforth DE, Weller P, Littlewood JM. The chest radiograph in cystic fibrosis: a new scoring system compared with the Chrispin-Norman and Brasfield scores. Thorax 1994; 49:860-862. [PubMed]
A chest X-ray score devised and evaluated by members of the Northern CF Club (NCFC) (figure 33) – an informal group of senior paediatricians and respiratory physicians treating increasing numbers of children with CF in the North of England. The group was formed in the mid-Eighties by Jim Littlewood to discuss difficult clinical problems encountered with increasing frequency by those of us responsible for treating people with cystic fibrosis. The initial format of the meeting was to meet at the Cottons Hotel in Cheshire to discuss specific patients during the late afternoon and evening. It was essentially a mutual support group fro clinicians to help each other to decide the best treatment for some of these problems which many of us were encountering for the first time. 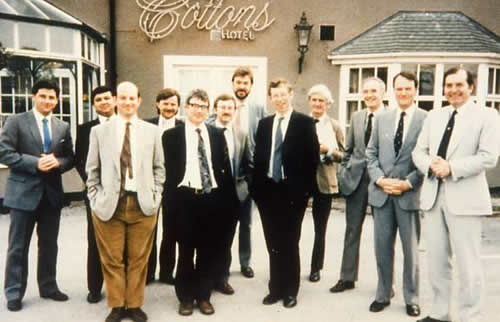 The “Northern X-ray Score” is now used routinely in many CF centres in the UK and the authors suggested it – “fulfils the requirements of a chest radiograph score more successfully than the Chrispin-Norman or Brasfield systems and does not require a lateral film” – hence reducing considerably the irradiation to the patient. So the published research output of our Northern CF Club was quality not quantity; but countless patients benefited from the advice their doctors received from their colleagues at these monthly meetings!

The “Northern X-ray Score” is now used routinely in many CF centres in the UK and the authors suggested that it – “fulfils the requirements of a chest radiograph score more successfully than the Chrispin-Norman or Brasfield systems and does not require a lateral film” – hence reducing considerably the irradiation to the patient. So the published research output of our Northern CF Club was quality not quantity; but countless patients benefited from the advice their doctors received from their colleagues at these monthly meetings!

2014 Thia LP. Calder A. Stocks J. Bush A. Owens CM. Wallis C. Young C. Sullivan Y. Wade A. McEwan A. Brody AS. London Cystic Fibrosis Collaboration. Is chest CT useful in newborn screened infants with cystic fibrosis at 1year of age? Thorax 2014; 69(4):320-7.[PubMed].
The objectives of this study were to standardise CT data collection across multiple sites; ascertain the incidence of bronchial dilatation and air trapping in newborn screened (NBS) infants with CF at 1 year; and assess the reproducibility of Brody-II, the most widely used scoring system in children with CF, during infancy.
A multicentre observational study of early pulmonary lung disease in NBS infants with CF at age 1 year using volume-controlled chest CT performed under general anaesthetic.
65 infants with NBS-diagnosed CF had chest CT in three centres. Small insignificant variations in lung recruitment manoeuvres but significant centre differences in radiation exposures were found. Despite experienced scorers and prior training, with the exception of air trapping, inter- and intraobserver agreement on Brody-II score was poor to fair (e.g, inter observer total score mean (95% CI) coefficient: 0.34 (0.20 to 0.49)). Only 7 (11%) infants had a total CT score > 12 (i.e, > 5% maximum possible) by either scorer.
The authors concluded that in NBS infants with CF, CT changes were very mild at 1 year, and assessment of air trapping was the only reproducible outcome. CT is thus of questionable value in infants of this age, unless an improved scoring system for use in mild CF disease can be developed.
Another very useful study from the London Cystic Fibrosis Collaboration.

The authors conclude that BAE is safe and effective in patients with CF presenting with life-threatening hemoptysis. BAE results in high rates of long-term technical and clinical success in this patient population despite progressive chronic disease. Repeat embolization is necessary only in a minority of patients.

Dr Lynne N Martin is a resident in the Division of Interventional Radiology, Stanford Medicine, Stanford

This is an observational, non-controlled, non-randomised, single-centre, prospective study. This study is conducted at the Liverpool Heart and Chest Hospital (LHCH) adult CF unit. Participants are adults with CF. This study reviews DCR taken during routine CF Annual Review (n=150), validates DCR-derived lung volumes against whole body plethysmography (n=20) and examines DCR at the start and end of pulmonary exacerbations of CF (n=20). The primary objectives of this study are to examine if DCR provides lung function information that correlates with PFT, and lung volumes that correlate whole body plethysmography.

Dr Thomas FitzMaurice is a Clinical Fellow at the Adult CF Unit, Liverpool Heart and Chest Hospital NHS Trust, and the Institute of Translational Medicine, University of Liverpool, Liverpool, UK

Numerous issues must be addressed when developing standard operating procedures for clinical research studies involving chest computed tomography of lung disease in patients with cystic fibrosis (CF). Study success depends on the provision of adequate funding and the identification of personnel with the necessary expertise to conduct the study, along with clear guidelines that detail the CT operating procedure at each site, including breathing maneuvers, and image reconstruction. Close coordination of the quality assurance process between sites and the central review organization is required to maintain protocol adherence. The data transfer process must ensure the integrity and security of the data to comply with patient privacy regulations, and study outcome measures are best assessed with a scoring system or other structured method of imaging data analysis. The recommendations provided are designed to serve as a valuable reference guide for planning clinical research studies of patients with CF involving chest CT.

The authors showed an expiratory chest CT protocol was accurate in diagnosing early signs of CF disease and permitted significant reduction of radiation dose. This protocol would allow spacing out of complete CT scanning with its higher radiation dose and should be considered for the monitoring of lung disease severity in children with CF.